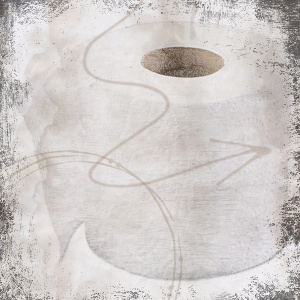 His slender fingers, smooth and agile
gentled the paper back around
he made no sound
no patterns noticed, no crumpled edges
it was perfection, done

His nose drank in the thick coffee scented air
awaiting his return
he licked his lips, remembering her brew
instead, only salt flavor
from his morning run

His name was Peter
oddly enough
Peter was from St.Petersburg
they met yesterday

He forgot
just like the day
to replace the roll
so carefully wound, he returned
to complete his agency

TP never looked so good,
he was proud
he was certain
she would never learn
of his transgression

But once a roll unrolls and rolls
there is no returning to perfection, ever
there will always be telltale signs
scars and scabs, wounds

When are we leaving?
I have a plane to catch later tonight?
He thought Tiger didn’t remember
A child playing with her emotions
she had already ordered the Uber

A modern chariot of escape
for both of them

The TP roll was a brick in his hand
something to throw at her
but it wouldn’t hurt
just frighten, then
he could leave

He could walk out the door
fly home, instead of seats
narrow, too close, no room
yes fly, Peter wanted to fly

He will land with ease
and be free of her
cheap toilet paper
too thin, see through

She would make him leave
Peter from St. Petersburg
telling him it was all his fault
unrolling the facts
not able to take them back

Drbroye utro.
Da, was all she answered.

The coffee shouted
from cracks and corners
seeped and puddled
Leave. Just leave now,
Peter from St. Petersburg.
You are not welcome here.

And Peter from St. Petersburg
rolled out the door.

This is what happens when you write after midnight. Of course, toilet paper is on most everyone’s mind in this odd time in our lives.

The prompt from the NaPoWriMo/GloPoWriMo folks today, or should I say yesterday, was ridiculous in the most delightful way.

I simply went down the list and wrote to each prompt with as just a ridiculous story. Each stanza goes with each prompt in order (except for the name prompt which I used earlier in the poem.) But I like the last two stanzas.

Our (optional) prompt for today is one that we have used in past years, but which I love to come back to, because it so often takes me to new and unusual places, and results in fantastic poems. It’s called the “Twenty Little Poetry Projects,” and was originally developed by Jim Simmerman. The challenge is to use/do all of the following in the same poem. Of course,  if you can’t fit all twenty projects into your poem, or a few of them get your poem going, that is just fine too!

Error: Twitter did not respond. Please wait a few minutes and refresh this page.